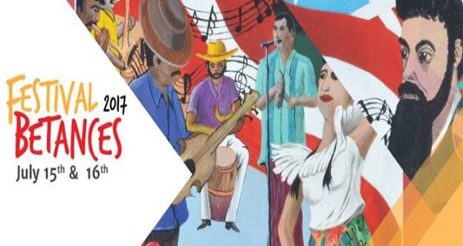 NG2 performing at the 2015 Festival Betances

What is Festival Betances?

Festival Betances has become a staple in New England’s Latino community. Every year it draws a 3,000 multi-cultural audience. Through the years, Betances’ stage has seen multiple musical and dance performances, ranging from local and regional acts to international Latin music icons such as Larry Harlow from Fania All Stars, Tony Vega, and Tito Rojas.

The Festival is named after Ramón Emeterio Betances, a Puerto Rican patriot whose medical contributions benefited Latin America, the Caribbean, and the United States. He also became a leader in awakening national consciousness in Puerto Rico, and is considered one of the foremost intellectuals of the 19th century. There is a plaza and a mural dedicated to him where the festival is held.

Our family-friendly weekend includes: a parade, traditional cuisine, arts and crafts, a greased pole competition, children’s activities like face painting and inflatables, and other treats that highlight the diversity of Latino culture.

Let us know what you’re most excited about for Festival Betances this year on our event page!

Check out some of this year’s artists below: Zayra Pola with 3nity: This Salsa singer, drummer, & percussionist is sure to bring everyone to their feet with her melodious voice and rhythmic beats El Amable De La Salsa Johnny Rivera: This tropical and salsa performer and producer has toured the globe performing, and made a name for himself with well-known songs like “Cuando Parará La Lluvia” and “Por Eso Esta Conmigo”

“A perfect display of the power of the arts within a community.  A gathering of people from all walks of life all thanks to latino culture and the work done at IBA.” – Alex Alvear, musician and former performance manager at IBA There are many ways to participate in Festival Betances!

The Perfect Chance for Exposure

Get Involved with your Community

If you would like to Sponsor Festival Betances 2017, please contact Elsa Mosquera at emosquera@ibaboston.org or by calling (617) 927-1737.