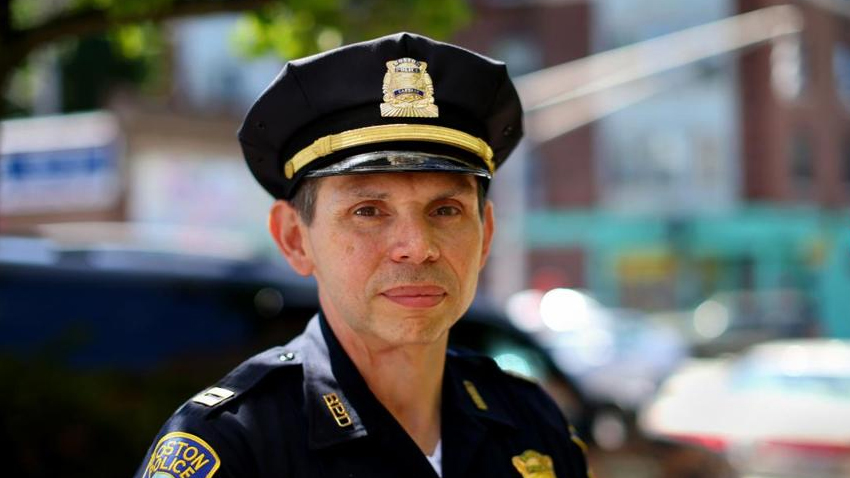 When the Boston police were hauling Alfredo Andres home to his mother after catching him running around a private field trying to catch small animals, the boy never imagined himself in law enforcement, let alone as captain of the Jamaica Plain District.

“I never wanted to be a police officer,” said Andres, 47, sitting in his Washington Street office and laughing about his boyhood brushes with the law. “I just wanted to graduate high school.”

But two years ago, Andres, who left Cuba at age 5 with his parents and two brothers and grew up on Forbes Street in Jamaica Plain, became the first Latino captain in the history of the Boston Police Department. In February, he took command of District E-13 — his childhood neighborhood.

“In law enforcement, you get to meet people, you get to think, ‘I can help people. I can possibly make a difference,’ ” he said. “As I see it, being a police officer, you really defend people who can’t do it by themselves.”

A compact man with a neat side part and a boisterous voice, Andres found his way to the police force slowly. His parents split up when he was about 10 — about the time the police caught him in that field — and his father headed for Miami, leaving his mother to raise three sons by herself with the help of public assistance. Andres was directionless. He graduated from high school and got a job working for Boston Gas. He had just been fired when an Army recruiter called him.

“They were like, ‘Hey, what are you doing?’ I was like, ‘Hey, nothing!’ ” he said. He joined at 19, was stationed at Fort Benning in Georgia, and realized he loved the structure of military life. He can still tick off the names of his drill sergeants, and says they taught him the principles of hard work that guide him today.

He left the military three years later with the rank of sergeant, and got a job as a prison guard at Deer Island House of Correction.

There were moments that reminded him of the other paths his life could have followed. One day, as he was opening cells, he heard someone call out his name, and found himself facing a friend from his old Jamaica Plain neighborhood.

“I can kind of see how people get lost,” he said. “Sometimes, I think it could have been me.”

That awareness gave him a staunch belief in rehabilitation. And to those who know him, it is part of what makes him a good cop.

Andres left the prison and worked as an MBTA police officer for two years. In 1995, he joined the Boston Police and found his home.

Known for his hard work and fast, fair judgment, he rose through the ranks from patrol officer to lieutenant, and in the summer of 2009, then-Commissioner Edward Davis appointed him to serve on his command staff as deputy superintendent.

When Commissioner William Evans was appointed in January, he asked Andres if he would serve as captain in Jamaica Plain, since he had achieved that rank in 2012.

“When the opportunity came up to appoint a new captain at District E-13 in Jamaica Plain, Al was an easy choice and a natural fit,” said Evans in a statement. “Given the fact that Al’s from the neighborhood and he grew up in JP, he has the advantage of knowing a lot of people and a lot of people knowing him and that’s only going to help him.”

In the first six months of this year, Jamaica Plain has seen a 16 percent decrease in major crimes — the second-largest drop in the city

Andres gives most of the credit for the drop to highly engaged residents, to his predecessor, Captain Paul Russell, and to smart police work citywide.

As captain, Andres said, he focuses his resources on targeting “impact players” and “hot zones” — the gang members who drive crime and the areas where the most crimes occur. In Jamaica Plain, he said, that’s the Bromley-Heath housing development and Egleston Square. Impact players are given a choice, he said: leave the life, or get targeted for arrest. Clergy, community leaders, and police attempt to connect them with resources such as GED or college classes.

He emphasizes community policing, saying that issues like public drinking can be curbed with a visible uniform presence; for gang problems, plainclothes officers conducting targeted investigations are often the answer. And to deal with issues such as homelessness, mental illness, and drug addiction, he said, police partner with health workers to try to connect those in need with services.

With a few exceptions, Andres doesn’t believe in zero-tolerance policing.

“It’s too wide of a net that has too much collateral damage to it,” he said. “Zero tolerance is basically, you take them and you lock them up. Well, what I’ve found, working corrections and what I see here is, they come out. Everyone comes out. . . . Better to try and fix the long-term problem.”

He has teased older officers that they probably used to chase him when he was a kid, and he still can’t pinpoint the moment he realized he wanted to be a cop. But he’s happy to be policing the streets of his childhood.

“I can’t imagine myself doing anything else,” Andres said.

Evan Allen can be reached at evan.allen@globe.com.